As you may have noticed, the June dev log was skipped due to excess of sunshine. This doesn’t mean that development has stopped during that time, it merely slowed down. In addition, a lot of the work didn’t result in visible changes, so overall it didn’t feel super useful to drop a new dev log.

In this one, the updates are not dramatic, but they are nice nevertheless and I felt it was time to give some news anyway, so here it is! 🙂

Thanks to the work of my new collaborator Mihail Ilinov, the weapons system has become a bit more flexible.

On the melee side, a default “weapon” is now equipped at all times: the character’s fists. This reflects better that it’s possible to fight bare-handed. In addition, wooden sticks can now be used as weapons of fortune (in addition to being crafting material). This will be particularly useful in the future when weapons will be able to break, allowing you to pick up and use a stick until you manage to find a proper weapon.

On the ranged side, a similar weapon, “hands”, is now equipped by default. This one is more than a cosmetic change, as it now allows you to perform ranged attacks even if you don’t have a ranged weapon. Using only your hands, you can now throw stones and (we added that mostly for fun), shurikens! In the case of the stones, this is another way to increase survivability in the wild and to make items more versatile.

In addition, the slots for bows and guns and their respective containers have been merged. You now have one single ranged weapon slot, which can accommodate different ammunition containers depending on the weapon. Also, you can now have a melee and and ranged weapon equipped simultaneously, which is more convenient in battle.

In the future, these changes will allow for a wide variety of weapons, including all sorts of throwables. The next step in the development on that front is to restore the use of bombs and AoE throwables in general, which should be one big plus to the battle system.

On a nore visual front, the battle timer of the battle interface has now moved to the right of the screen, in the form of a queue displaying the fight order of the different participants in the fight. This should hopefully provide a better idea of the rhythm of the battle.

A more mechanical change is the addition in the lower-left corner of a “belt” panel. The belt is a small inventory (which you can populate via the inventory menu) that contains items that you want to use during a battle. Some kind of quick slots if you want. In the belt, you can store extra ammunition, alternative weapons or healing potions for example.

This (as well as the other changes mentioned in this post) can be seen in action below:

Only items that are in the belt can be used in a battle; if you didn’t put it in your belt beforehand, it’s too late. In addition, the number of slots in the belt is quite limited. Those two aspects, therefore, will require a bit of planning on the part of the player. It will be possible to increase the capacity of the belt (number of slots) by crafting better belts (not possible just yet), similarly to how it’ll be possible to carry more items in the global inventory by crafting better backpacks.

One last change that is relevant with the battle experience is that towers are back, fully functional (in the sense that they can participate in fights by shooting arrows), and look better than ever thanks to a new artist helping out, Sérgio Sequeira. See below! 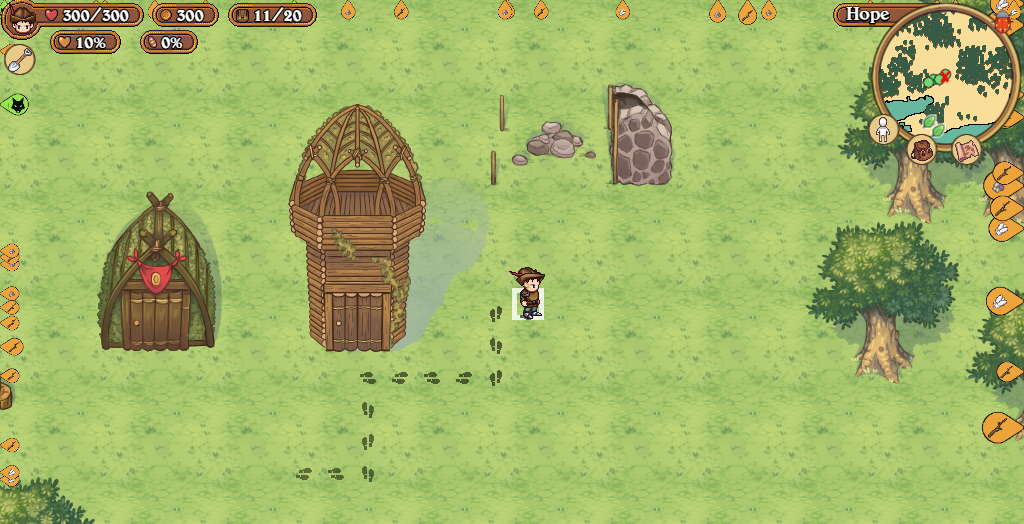 If everything goes well, the main next step would be to reintroduce the enemy civilization. Coupled with the recent (and future) improvements to the battle experience, this should be interesting. The challenge will be to make that civilization behave in a complex way to make interactions fun and interesting. This will likely take some time to mature, but hopefully the first steps will be visible next time!