The title of today’s dev log is not an attempt on my part to subtly communicate that I’m overworked and in need of more Patreon donations (although they are always welcome). It actually references two new mechanics in the game, pertaining to rest and food, respectively. More below!

Two new capsules have appeared in the top-left corner of the game, representing a player’s vigor and food levels.

Vigor essentially represents how tired a character is. It starts at 100% and gradually decreases as the player performs actions (walking, crafting, …). As it gets lower, it starts impacting the battle stats. The lower it gets, the higher the impact, to the point that normally very easy battles can become very dangerous. In the future, when abilities are introduced, low level of vigor will also have the effect of completely disabling some of them.

To recover vigor, you need to rest. You can do so by spending time in a shack. That building had been around for a while but wasn’t functional; now it is. Simply put your character there for a while and it will recover vigor and health (also when offline!). Some items can also restore vigor. 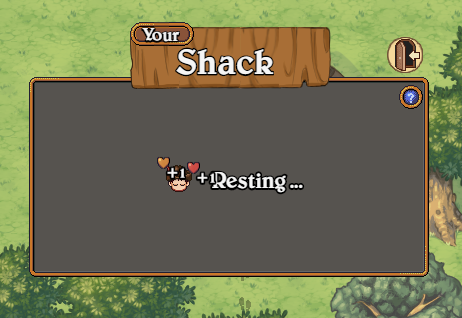 Food is another personal “resource” that you need to manage. The food level gradually decreases over time (regardless of the actions you perform). In itself, the food level has no impact, but the lower it is, the higher vigor depletes when performing actions. The way to replenish your food level is quite straightforward: hunt something and eat some of the food you collected! (In the future non-meat based food sources will be available.)

Another, perhaps a bit more original use of food is that it can be used to boost the productivity of buildings. Each production building (e.g. lumber camp) produces resources at regular intervals. But as long as there is food in the building, the amount produced will be doubled (and food consumed).

As with almost everything else, there is a collaborative aspect to it: other players can put food for free in some of your buildings, or you can set a buying price to encourage them to sell you some so you can enjoy its benefits.

The motivation behind these two mechanics (food and rest) falls under the umbrella of personal resource management. Venturing away from settlements for extended periods of time should be dangerous and should require preparation. Being well-rested and stocking on food and medicine, for example. In the future, it’ll be possible to craft campfires to rest, which will be one more way to prepare. And even more other manifestations of personal resource management are planned.

Speaking of production, I have significantly increased the production rate of everything. It used to take 10 minutes to produce 1 timber. The thing is, you can’t do much in the game yet without timber, and waiting is not fun. Now, everything is produced much faster. In exchange however, the production limits have been reduced. For example a lumber camp can only store 5 timber at a time. So if you need 20, you need to drop by 3 times to empty the stock. On the other hand, it will take 10 times less time to produce. We’ll see in the future how it goes, but it should definitely make things a bit more dynamic, and encourage players to drop by regularly.

I have started improving a bit the battle interface. Health and equipped weapons are now displayed in the bottom-right corner, as seen below. 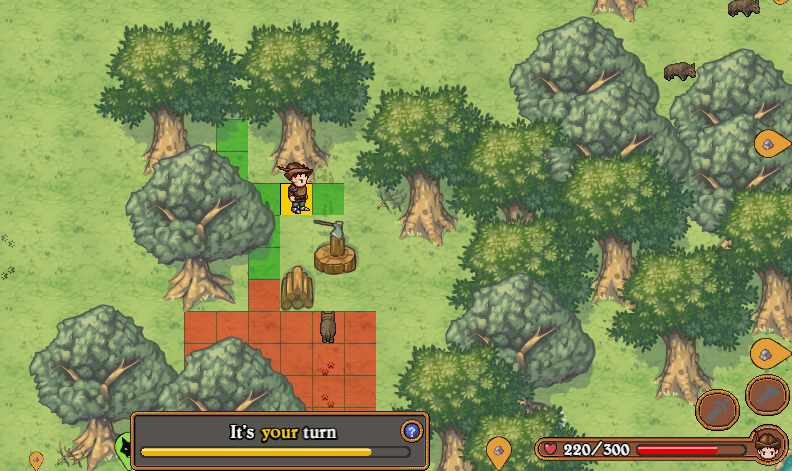 In the coming weeks, I’ll try to find a better way to display the turns counter, as well as add a better looking way to use items in-fight.

Finally, some work went into expanding a bit the tutorial to reflect some of these new changes. It is not complete yet, as it is actually quite time consuming to do, but the tutorial already explores building, crafting, trade and rest. Check it out if you are unsure about some of these mechanics!

In addition, the code for the tutorial used to be extremely ad hoc and brittle. I have improved it a lot to make it more future-proof and easier to expand. It should also be less buggy! One big change is that the tutorial used to be completely offline, not communicating with the server at all, which introduced a lot of issues. Now, the tutorial fully takes place in the very same world as the game itself, but in a “parallel dimension” if you will so the two don’t interfere with each other. 🙂

For the coming weeks, I plan to restore the enemy civilization and focus a bit more on the battles (interface and mechanics). If it goes well it should boost the playable time of the game significantly, as it would reintroduce a permanent challenging element and a goal to strive for. Looking forward to it!